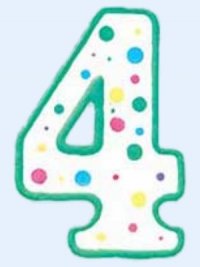 Consumption and overspending need not be part of your family birthday tradition.

Birthdays are definitely cause for celebration, but in many ways the American norm has gone over the top. While birthdays can be celebrated in a gazillion ways, there seems to be one commonality: decadent consumption.

I’ve read articles about some of the extreme one-upmanship that parents can play into, and how often parties are thrown without even talking with the child about what they want. I remember going to a kid’s party prior to becoming a parent where all the kids brought a toy as a gift, and in the end the child was totally overwhelmed by about a dozen plastic gadgets. The birthday was in September, and I calculated that if the child played with each toy for one week until Christmas that they still wouldn’t have played with them all! And really in the scheme of things, this was a pretty average birthday for a middle-class American child (key word: American.)

Then there are the obligatory gifts bags for all the kids, often filled with cheap plastic things made in China. At one party, the gift bag had a plastic spinning top that lit up as it bounced, and within about 5 minutes the top came off and I discovered a mercury disposal warning inside! I was dismayed, but knew that the Mama of the birthday girl had only wanted to see the kids smile.

We can choose to celebrate in meaningful, simple, and fun ways. Others have already written creative Planet Friendly Party Tips, so I won’t repeat ever idea under the sun here. But I would like to share what I’m doing for BigGuy’s 4th Birthday Party:

I will also note that this is also BigGuy’s first “class” party (only boys at his insistence!). His first two years we celebrated as a family and last year’s small party was as much a chance to show off our new Girly, since she was just six days fresh. In future years I plan to take the lead from the EnviroMom bloggers and celebrate through other creative and experiential ways. Growing up as a twin, my mom chose to throw us big parties only at milestone ages: 6, 10, 13, 16, 18. On the in between years we could each have a friend for a sleepover, which I recall being just as much fun as the big parties. Another childhood friend had a birthday in the winter, and we did a beach party together for their 1/2 birthday (which was our true birthday.)

The key is to talk as a family about how you would like to celebrate. Set clear expectations to make sure that the no-party options isn’t seen as a punishment, but just a unique way to celebrate a unique person. 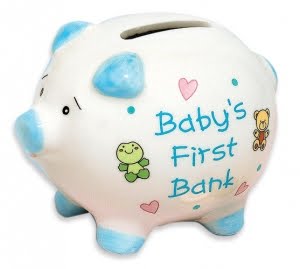 It’s birthday season in our family, with Girly’s 1st on Monday, and BigGuy’s 4th this Sunday.


We have a generous family, and every year we receive birthday cards with loving notes and checks included. For now these pieces of paper seem inconsequential to our children, even as the cards bring them great joy (BigGuy has actually being playing with his spaceship card every night this week!)


Up until this year I’ve always found some thoughtful way to spend the money, usually new shoes or a family outing. But this year, in light of my newfound financial focus (and my gainful employment), I am ready to start saving their birthday money.


You might wonder how much would $100 actually grow in interest by the time our kiddos fly the coup? According to Suze Orman’s Compound Interest Calculator, if I started with $100 and added $10 a month at 2% for 17 years, Girly would have over $2500!!


To us adults with mortgages and bills, this may seem like relative chump change. But imagine back to when you graduated from high school, and how exciting it would be get this type of cash. I also want to be clear that while I do plan on saving for our children’s college (soon!), this account will not be earmarked for education per se. It will be up to them to decide how they want to spend it when they come of age, whether that ends up being travel or rental deposit; it will be their fund for start adulthood.


I’m going to take a nod from my money savvy sis and open a new SmartyPig account for them which will earn 2.01%. SmartyPig has a fun social function to it too, so you’ll be able to see how full the pig bank grows as our kiddos grow. And while the Grandparents and Great-Grandparents aren’t big Facebookers, they may get a kick out of seeing their money saved rather than squandered.


So, if you’re lucky enough to not need gift money for the essentials, comment below to make the pledge that you’ll open a savings account at your child’s next birthday!


This birthday month has helped me focus on how we really want to celebrate, and I’ll share more on that topic tomorrow.


*~*~*~*~*~
Sustainable Family Finances
The story of a family creating an abundant and sustainable life. 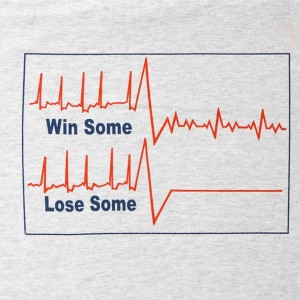 Some days don’t go as planned and you just have to make it up as you go. The past few days have been like that for me. Instead of being healthy and happy for Girly’s big 1st, three of the four of us were feeling green, and not the good kind.


Lose – I found out that the email sign-up was accidently misdirected! So, if waisted a moment of your life trying to sign up, I profusely apologize. Please give me another moment by signing up!


Win – Once I was feeling remotely better, I managed to get together donations to drop off at the Goodwill.


Lose – I realized that most of my cast-offs were generous freebie offerings from family members, and I need to do a better job of politely saying no.


Win – I made a few score finds at the Goodwill, including a pair of cute Girly jeans, two Berenstain Bear books for BigGuy, a National Park to-go coffee mug for Hubby, and a cute purple checkered blouse for myself.


Lose – I caved on emotional purchase, and couldn’t help myself from buying the original Parent Trap 1 & 2; as a twin, it’s one of my favorite childhood movies.


Win – Both Oregon ballot measures 66 & 67 that I shared in Green Taxes, passed overwhelming! 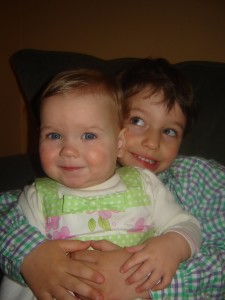 Today is my Girly’s 1st Birthday! As any Mama, this day brings my mind back to place she was born. In our case, that means her bedroom. We planned a home birth, with medical support from a professional midwifery clinic.


We had a successful hospital birth with our BigGuy, and full health insurance. So, our decision wasn’t necessarily a monetary one, but it did save us a whole lot of cash . All costs were fully covered by our health insurance, including the birth tub and birth kit bought online. I certainly don’t advocate for considering a home birth based on finances alone, but it is a safe alternative to hospitalization. Here’s an interesting article from Fit Pregnancy about Better births, lower costs.


I was inspired by the eye-opening documentary “ The Business of Being Born .”
I had considered myself to be fairly well educated, but this film made me realize just how the obstetrics industry has been stripping mothers of our right to birth naturally . Statistically, only 1 in 100 American babies are born at home. Yet, 1 in 4 American babies now come by Cesarean surgery and the majority of mothers/babies are sedated by drugs at birth. I feel very lucky that my first hospital birth had minimal interventions and no drugs. Not everyone is so fortunate.


Before I go any further, I want to say that  hospitals are amazing places for high risk pregnancies, where  moms and babies need medical support . In an emergency, I would not have hesitated being transferred and fully appreciate modern medicine.


My top 10 reasons for having a home birth:


If you or someone you know is considering home birth, I’d like to offer up these resources:

My last two cents on the subject: birth is a natural process that has been going on since our beginning; having faith in this mysterious process has helped us endure and succeed. Plus, home is where the heart is, where families grow, and dreams are born. 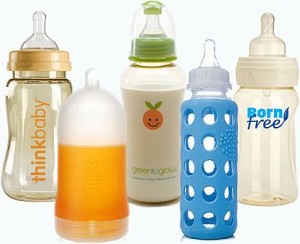 Before my BigGuy was born I remember researching to find the best baby bottle. I chose the reputable Dr. Brown’s brand, because my biggest criterion was avoiding the painful saga of colic. I got lucky with no colic, but around the time he was weaning news broke that the bottles contained the toxic chemical Bisphenol-A or BPA .

Many companies responded by creating a “green baby bottle market,” and I was able to afford to buy new “BPA-Free” bottles for my Girly. Yet, many parents can’t afford these more expensive bottles or don’t understand the risks involved.

This week the FDA finally issued a warning about BPA’s toxicity; sighting research that exposure can harm a child’s brains and reproductive systems. Though the FDA supports “industry’s actions” to eliminate the use of BPA in food related products, this warning itself does nothing to stop its widespread use. The NY Times agrees that “wise consumers will try to avoid BPA.”

I don’t know about you, but I think we should follow Canada and Europe and get BPA off the market. It’s up to us to insist on banning Bisphenol-A. Minnesota was the first state to issue a ban, and several other local jurisdictions (California’s was defeated). Now states like Oregon are taking up the legislative torch to Ban BPA. There are pending bills in Congress too, and I truly hope consumers are successful.

Let’s take it a step further and work with Safer Chemicals: Healthy Families to reform the toxics regulations altogether.

Lastly, I hope my BigGuy will have no long term health effects, and I’m sure glad that he liked his milk cold!

Sustainable Family Finances
The story of a family creating an abundant and sustainable life.