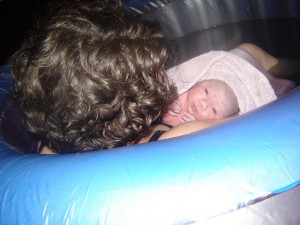 It may seem strange, but after the initial shock of my father’s passing softened, I suddenly had the urge to have another baby. It wasn’t in sorrow, but in tears of joy. I felt like my heart had been broken open and I needed a place to give my extra love. Suddenly, deciding to  only have two children based on environmental ethics felt like I was limiting myself.


Admittedly, the logistics of it had to do with money. Knowing that I would be passed down family money, I contemplated what I could do to satisfy a legacy. My grandmother would have loved for me to have more children…she always joked, “You know, they are cheaper by the dozen!” She had three children herself, but came from a well-off family with seven children. My grandmother was proud of me for going to college and getting Master’s (and she always pushed that in this day/age that I should be able to support myself, just in case), but she also thought I work too long of hours. She worked long hours herself until she had a family (and remembered her hourly wage for every job she worked until she passed away at 94), but she  lived in a different era, and shook her head at the idea of getting two little ones dressed and out the door by 7 every morning.


So, back to the baby decision…


Well, when I brought up the idea to Hubby he was less than enthusiastic. While he had pressed me for a third just a year earlier (which I thought was way too soon), he suddenly felt he was too old (he just turned 42). Or maybe he thought I was just making an emotional decision (which I was…). At any rate, we’ve come to a place of peace with our equally balanced household.


But I still can’t help but think that if I lived in different economic era that I would be quite happy with more kids. Finances simply does play into our family planning these days, whether families want to admit it or not. E ven if we had decided to have a third, we had only ever talked about the possibility in the context of having at least our older in grade school so we could afford  expensive child care . I know an  acquaintance, whose husband owns a small bike shop, who decided to not have another child based on the fact that they felt they couldn’t afford it while his shop was getting off the ground and she was staying home to take care of their son and assist on the business.