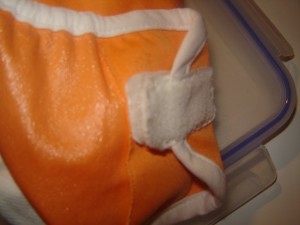 I’ve been feeling a bit naked lately…without schlepping cloth diapers to/from the office/childcare. You see, once we got serious about potty training and having Girly visit the Toddler room for potty visits, it became challenging for staff to tote clean/dirty diapers between classrooms with up to four Wobblers. I can only imagine the feet of patience that would require, so in an effort to support their effort, I agreed to no longer using cloth diapers at “school”… naturally hoping that this will speed the process toward no diapers altogether! 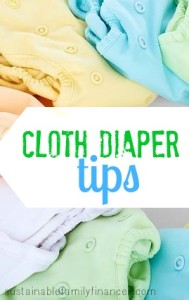 Not that I want to brag about our effort to use cloth diapers almost full time, but it is pretty rare. I was lucky that the first few months after Girly was in childcare she attended a place that provided cloth service (at no extra charge!), so when we transitioned, I didn’t really want to give that up. But I also knew that it would require quite a bit of effort on my part. Beyond doing two extra loads of diapers per week , one of my initial tests was getting full support of staff to use cloth. They were open to it, but still needed some support on the learning curve…some of these tips should be helpful to new parents too!


Note, most critical factor to hauling dirty diapers is a smell proof container. I bought snapping boxes with handles at Storables, and they truly keep the smell out. I skipped expensive diaper pails in our laundry area for a large snap close tub.


Here is the personal tip sheet that I made for staff to help with using cloth diapers:

Thank you for making the extra effort to use our cloth diapers!

I try to set them up in advance so you don’t have much prep work. Here are a few tips to help make both our lives a bit easier:

Thanks!!
Darcy and family

Here’s a review of the new Bum Genius diapers, which happen to be one favorite brand


Do you use cloth diapers in a childcare setting…any tips? 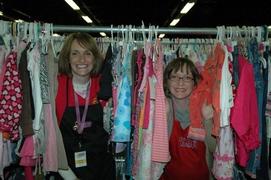 I just got back from picking up leftover items that didn’t sell at this weekend’s Just Between Friends sale in Portland. I wrote earlier about signing up to volunteer/consign and the emotional process of tagging sale items…now I want to share my experience and lessons learned.


First, I have to say that I had fun volunteering, and it was amazing to see such a massive resale event. I’ve certainly never seen anything like it, and it was like a green version of Black Friday! The organizers Brooke and Tammy deserve compliments for hosting such a well-organized and friendly event. 🙂


Second, I have to admit that I didn’t make any money!  In the end I sold only 11 items for $31, and bought 19 items for $67 worth of clothes for Girly.  But that’s not to say that I didn’t get a bargain…I sold things I no longer needed, and bought a whole set of clothes in the next size up. The most expensive item I bought was $6.50 for brand new Gymboree jeans (with originally priced at $30), and cheapest was a Gymboree swim top and shorts for $2.50…hopefully most of them can be resold in another year…


Third, my limited sales is also because I had already gave away a lot of the clothes as hand-me-downs to close friends,  all of our Big Guy’s summer clothes to a friend in Costa Rica, and virtually all of Girly’s clothes were passed on to a close family friend. I don’t regret sharing, but it did mean less to sell.


Yet, here are my mistakes:

What lessons do you have from JBF sales? 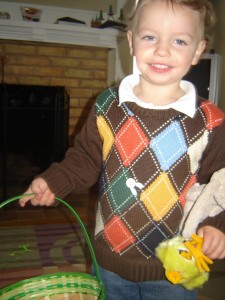 I’ve been really busy this week…tagging items for the Just Between Friends consignment sale in Portland this weekend (Sat/Sun at the Expo).  I’ve been prepping part-time for about a month time, but crunch time is here.


I feel like quite the novice, but thankfully they’ve made the learning curve easier. JBF has lots of quick videos and tip sheets to explain the do’s and don’t of consigning. It turns out that I won’t be able to purge as much as I was hoping, since they only accept seasonal clothing (so no cute holidays sweaters!) I also realized how much was really stained or ripped, so I’ve got a big donate pile.


But what I didn’t completely expect were the emotions involved in sorting through all the baby/little kid clothes. I should have known, since a good friend recruited me to help her with the task of sorting her baby items (and generously donated her used items for my service of helping her!) Together we managed to be pretty efficient and didn’t get too bogged down in the emotions of purging.


Yet, when my turn came, it was harder to detach myself from the memories and personal meaning of each cute outfit…like the Easter sweater here. I had managed OK, but then our Big Guy started asking me why we weren’t having another baby…again. He’s been asking us for a baby for months now, and it always tugs at my heart. We’ve made the decision to stay a family of four last summer, but it’s not the easiest thing to explain to a child, especially one who is so eager to help out (even claiming he’ll change diapers!) The kicker was this time he asked if I was selling the birthing tub I used for Girly, I actually already sold it on Craigslist…but the question once again made me second guess our choice…maybe getting some new/secondhand clothes will give me more to look forward to…plus I tried to tell myself that I’m sharing the joy!


Have you shopped/consigned at a Just Between Friends sale?
Here’s a great review from a fellow mom blogger. 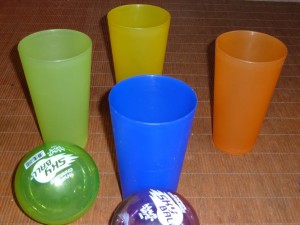 I hate to admit it, but my well intentioned birthday gifts have been mostly a bust. I envisioned our Big Guy showing us his moves on the Wobble Deck and Girly giggling like she does when anyone dances, but it’s truthfully gone almost entirely unused. I’m hoping that as Girly gets bigger it will peak their interest, but at this stage games need to be a family affair to keep their attention.


All fun was not lost…instead our Big Guy invented his own version of indoor bowling from four big tumbler glasses and the two Sky Balls Santa brought them. After a weekend of playing it BigGuy was just giddy, and the next day at school he was telling his teachers about how he couldn’t wait to go home and play more indoor bowling. Naturally, in this day and age she assumed that he was talking about wii bowling, and was surprised that he was so excited by such a low tech game.


On top of the kids getting lots of energy out, literally running back and forth across the house to collect balls and set up the “pins,” our Big Guy is also advancing his math skills. Maybe he would have been learning regardless, but since we started playing we’ve seen a marked increase in his addition skills. He’s now adding up the score each time, and calculating how many each player needs to get to win.


The real test is time though, and two months later he is still captivated. Soon he’ll start t-ball and we can finally play outside again, but I have a feeling that indoor bowling will become a perennial game in family…returning when the rain and darkness come…


While on the birthday topic, I want to share how close friends of ours saved on their son’s birthday party. Like us, they didn’t want to exhaust themselves with all the set up and clean of hosting a party. So they decided to “hire” their teenage niece and family’s exchange student. The girls came the night before and helped clean the house, they put together a puppet show, did face-painting, a standing version of musical chairs, and a piñata. Then they helped clean up after the party, and earned themselves each $50. We don’t have any older cousins in town, but this option sure does seem like a win/win.


Lastly, I haven’t regretted the other gifts, but I am starting to purge a lot of unused toys…there comes a time when parents need to let go.


Do you ever have birthday remorse?
What do you regret?

My latest finance endeavor has been to create a budget scenario for becoming the “sugar mama” for our household.  Hubby is facing a potential lay off , and we are preparing ourselves for the potential of surviving on a single salary . Apparently we’re not alone, and the recession has created a rise in sugar mamas.


Truth be told, Hubby has always wanted to start his own business, so this could end up being a financial opportunity in the long run.  But in the near term, it means deeply assessing our expenses and separating the fixed/unfixed/discretionary/non-discretionary spending.


From my initial scenario, my salary could just barely cover our monthly spending. There are two significant catches though:


Second , we’d have to   sell our car …more on that tomorrow.


Personally, I’m more concerned about the family impact of having no child care more than selling our car. It’s not that I don’t trust Hubby to be a wonderful Daddy 24/7…it’s really that there would be very little time for him to focus on starting the business that he’s anxious to get started. Any stay-at-home parent can attest to the challenge of accomplishing much beyond the rigors of childrearing. There other factor is that I think Girly really benefits from socializing in her classroom, and it would be a big adjustment for her. Although, in reality it would be a big adjustment for all of us.


We tease that I was the sugar mama when Hubby and I first met, since I was making more than him at my part-time job. I paid for a trip to Utah for spring break, and the nick name stuck for a while. But becoming the primary bread winner is a whole different situation, and even though I know several moms in this situation, I’m still playing out the various scenarios in my head…surely more update to come…


Are you a “sugar mama” for your household?