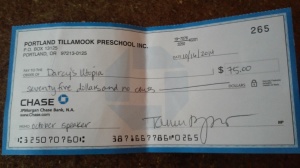 Last week I had my first $75 speaking gig. I shared an introduction to Simplicity Parenting with a fantastic group of parents from Tillamook Cooperative Preschool. Receiving a check written out to Darcy’s Utopia felt like a big deal, regardless of the amount. With all my training and prep, I feel like I’ve more than earned it.

I’ve never told anyone, but from an early age I felt a premonition that someday I would become a professional public speaker. As a freshman I entered a speech contest, and I think that year I placed third sharing why I thought that organic labeling should become mainstream. I ended doing better in debate than solo, but both obviously require speaking. In college, I was passionate about climate change and joined a speaker’s bureau where I gave several talks on college campuses. I found that the more that I shared my personal story, the better my talks would go, and even though I could explain the science of global warming, it was my passion for stopping it that shone through and compelled others to care.

Yet, in my first job out of college I had a dreadful experience of stuttering my way through a press conference with complete cotton mouth. I was mortified, and it’s taken me years to truly get over that deer-in-the-headlights feeling.

My presentation for Tillamook Preschool went well, and it felt like suuuuchh a long time a-coming. The parents were receptive and engaged, and several gave me genuine thank yous following my talk. With just an hour, I barely managed to skim the surface of SP, but I’m hopeful that I planted some seeds for a few families.

Speaking of seeds, that’s been my business mantra as I’ve taken actions holding hope that my seeds would someday sprout. Thanks how change works, it takes action and patience. My invitation to speak first came from an outreach email that I sent the school last spring, which also resulted in my first coaching client.

With my first true speaking gig under my belt, I’m ready to continue to hone my skills. I’ll give Toastmasters a try, and see where things go…just the idea of getting paid to speak makes me smile. Getting paid for your passion is what the new economy should be about.