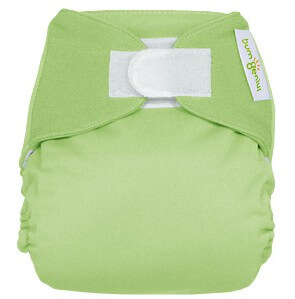 Diaper duty comes with the tasks of parenting. It’s a resource incentive chore in all regards costing time and money, while impacting the environment.


Funny enough, I was dissuaded from trying cloth the first round from another green Mama friend who had been overwhelmed by them with her new born (If you’re intimidated, plan to wait a few weeks or until they clearly fit). In my experience, once you’ve got a routine down cloth is pretty simple and worth the extra effort.


I love the fact that I can now go to Costco without throwing away another $50. BumGenius claims that you can save up to $1,200 and 1 ton of landfill waste.


In our family we’ve tried several different methods, so I’ll share a bit about our experience (Round 1 = BigGuy, Round 2 = Girly):


Cloth Diapers – Partly because we felt we had sold out, and partly because our (then) child care center offered a free cloth diaper service, we chose to try out cloth diapers when Girly was born.

If you want to read more, the best post I read was from a Dad’s perspective on CashMoneyLife , it was just written and he’s a big fan of cloth. There’s also a bit of discussion taking place on the EnviroMom blog. Consumer Reports , and Labor of Love blogs have some decent pro/con lists to consider, although some of the cons against cloth diapers are outmoded, like diaper pins. Thankfully, diaper pins are a thing of the past, I used them as a babysitter and there isn’t much harder than trying to not poke a wriggly baby!


Have you used cloth diapers?
Do you have any tips?