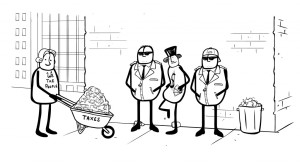 I’ve been a not-so-secret admirer of Annie Leonard “Story of…” series since just after I started my blog. Her latest “Story of Broke” really makes me motivated to take action.


After watching it, I kept thinking about how outraged I was when I first learned how much the government spends on warfare compared to education. There was a graph that made it appallingly easy to under that our
national budget was completely ill-prioritized. The thing that makes me sadder today is that was almost exactly 20 years ago (I vividly remember being at the Eugene Celebration and visiting all the environmental and social justice booths. I soaked it in like a sponge.) I also somehow naively thought that once I was old enough to start voting that things would get better…


Watching Annie’s latest video in the midst of an Occupy movement that will likely be moving to a different level (at least past the emcampment here in Portland) makes me finally believe that we may be gaining enough momentum to transform the economy. It’s time to move more than the deck chairs on the Titanic. I still feel a bit overwhelmed by the whole situation, but I certainly am not willing to wait until my kids start asking me why we spend our common money on all the wrong things.


Most of all, I love Annie’s message that we aren’t broke!! It’s really the kind of mental shift we need to make in order to realize that we do have the power to fix our situation. It’s both very simple and very complex, but I also believe that it’s very much worth us all doing what we can to take action. Watch the quick video, and I think you’ll agree.


“The United States isn’t broke ; we’re the richest country on the planet and a country in which the richest among us are doing exceptionally well. But the truth is,  our economy is broken.”


What action does Annie inspire you to take?